So before I get to 3 of my top killer tips for building stronger, more powerful and athletic legs, I want to share a story with you.

That old gym had quite a few guys in there that were massively huge.  They were your typical bodybuilders…   Always training on the machines and doing your regular old bodybuilding routines.  It would be quite common to see them doing all leg days, all chest day, all back days, ect…

Well this one guy, he was an absolute monster!  He had a great physique but, the only thing was he walked around like a robot.   Stiff as all hell and barely able to touch his toes!  He could hardly move!

I could remember the leg workouts he did well…  He would start out on the leg press and load the machine up with as many plates as you could possibly imagine.  He would then have his friend sit on top of the machine for added weight as he would have it loaded to the max.

Not sure if you’ve ever seen this in a globo gym before but it’s a spectacle for sure! pounds loaded up on the machine.   This was pretty impressive except he was only moving his legs about 6 inches which wasn’t even close to full range of motion.

Then after that, he would hit up the Smith Machine for some half squats.  Not FULL squats but half squats…  Of course he would load the bar up with a ton of weight and grunt his way through multiple sets.

Then he would do some leg curls and leg extensions.  The best was when he did leg curl drop sets…  You know when you start at a higher weight, do about 10 reps, then drop the weight a few pounds and do a few more reps, until you can barely move the weight and your legs are completely fried type of drop sets…

To the untrained eye, this was an incredible feat but, for any guy that truly knows his stuff, knew this was complete bullshit.

Well, it all finally caught up with him one day…

I can remember I was training one of my athletes and we were in the squat rack right next to this guy but only he wasn’t in a real rack, it was the Smith Machine.

We were hitting some squats and so was he.

I can remember he only had about 185 lbs on the bar and as always, was grunting his way through a set of HALF squats when all of a sudden…

It literally sounded like a number 2 pencil had been snapped in half!

The guy tore his freaking hamstring!

Luckily, he was able to rack the weight but, he was in some serious pain!

I asked if he needed any help but he literally grabbed his bag and fanny pack and hobbled out of there!

I felt a little bit queasy from hearing it pop.  Never hear anything quite like that and I’ll never forget about it…

I didn’t see him come around for a few weeks after that but, the moral of the story is this; If you want to build STRONG, POWERFUL, and ATHLETIC set of legs the RIGHT way, don’t go about it like this guy did…  You’re more than likely destined to get hurt!

In fact, here’s what NOT to do…

Instead of hitting tons of sets on the leg curl machine…  Instead, drag a heavy ass sled BACKWARDS.  If you want a serious pump in your quads, this will give it to you plus you’ll build up some serious conditioning and functional strength as well.  Or, do as Dave Tate would and hit a set of 20 Rep  Death Squats up…  See how your quads grow from that…

Instead of loading up as much weight as possible on the leg press machine…  Get under a bar and do some REAL “ass to grass” squats!  Now, I know this guy thought he was the sh*t but to be honest, I know for a fact he wouldn’t last 15 mins in one of my workouts.  Especially if I made him go FULL range of motion of his movements.

This is NOT to brag but I’m just telling it like it is.  If you want to be a true athletic beast, you’ve got to train like it!  Leg presses are NOT a part of the deal… 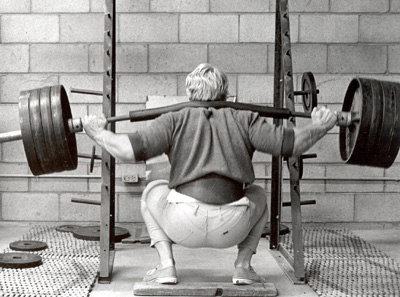 Don’t ever neglect bodyweight…  The guy in the story definitely needed to work on his form as his squats were half ass and his mobility was terrible!  Hence the major hamstring tear!

Going through a half range of motion on your movements will cause you to get super tight and overtime, you’ll be more susceptible to tears and even possibly ripping your muscles apart due to major lacks in both  flexibility and mobility.

re you even think about getting under a heavy bar.  I never once saw this guy hitting any sort of bodyweight movement ever.

For good measure, NO FANNY PACKS when you train…  You can’t jump or sprint very easily with a fanny pack around your waist.  Plus it looks a little gay…  That’s the TRUTH…

So, now that I’ve enlightened you with a great story from my past, here are the 3 KILLER tips I wanted to share with you…

This is the most important tip about all training period!  If you want to gain mass and increase your strength and power at the same time, you must train explosive!

Some perfect examples of training explosive would be to include various types of plyometrics and jumps into your training.  Ideally, you would add this type of stuff in at the beginning of your workout when you’re the most fresh.

When you train explosive, you want to train for MAXIMUM power.  If you’re highly fatigued, you’re power training will be hindered greatly so this is why you want to hit this type of training first.

For me and my athletes, I like to have a large mix of different jumps included into our session at the beginning.

So things like broad jumps, power skips, bounds, box jumps, and sometimes even depth jumps are some of the main movements we would do.

As far as reps and sets are concerned, you should mostly be worried about QUALITY and not QUANTITY.  A good total amount of jumps to get in before you get on to the rest of your lower body workout would be 25-30 tops.

You don’t want to overly fatigue yourself out for the rest of you session so 100 box jumps for time would NOT be considered “explosive”.

Another way I like to implement some lower body explosion training into my routine is through compound super sets in which you would perform a heavy lift such as the deadlift and then immediately after you hit your reps on the deadlift you would go right into a set of jumps.

This works real well to help increase your strength and power.

Another little known secret form of compound training that will get your legs jacked up is called the Litvinov Method is which you would perform a heavy set of front squats, cleans, or even overhead squats for reps of 5-8 then go right into a sprint.  Similar to the compound set above, as soon as you hit your set of squats, you would immediately go into an all out sprint for 5 secs.

This will get you EXPLOSIVE, FAST, and POWERFUL while helping build more mass.

This isn’t ideal for most people as they don’t have access to a track or open space to sprint near a squat rack but if it is, I would highly recommend programming it into your routines and giving it a try.

This tip shouldn’t be any big secret… 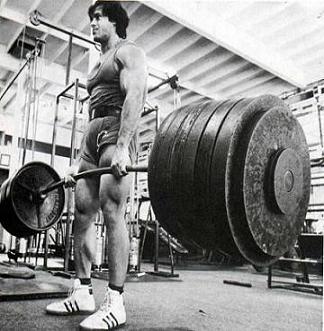 To get your legs bigger, more powerful, and strong, you must lift some heavy ass weights!

Some guys out there simply miss the boat and ditch lower body heavy lifting all together and when they don’t get results, they wonder why.

On the opposite end of the spectrum, some guys who do lift heavy, lift with horrendous technique which instead of getting them jacked up and strong, gets them busted up!  This is a whole other issue.

If you’re going to lift heavy, learn how to lift right.  Build yourself up to heavier weights and don’t let your ego get in the way.

I can remember back to my senior year in college, I maxed out at 455 x 5 reps for my squat the last time I tested out.  I know for a fact that my form was complete sh*t!  But, all I wanted to do was lift as heavy as possible and at the time, it was ALL ego.    It had way more risk than reward and to be honest, I’m surprised I didn’t mess my self up.

Now, since I’ve aged a few years and have learned that it’s not always about the weight on the bar but how well you lift it, I focus in on perfect form.  If my form gets a bit iffy, I stay at that weight until I can successfully show that I can handle it with near perfect form.

Now, when you lift heavy, of course your form will go a little bit bad but, you must be able to control it to some point.    You should be strong enough to know when your form is suffering a bit

The final tip is simple…  SPRINT and sprint often.

I would say at least once a week if not twice.

Regular sprints on a track or football field work and hill sprints are always welcome.

Sprinting is one of the most athletic things you can do but, if you haven’t sprinted in a while, make sure you build yourself up to it.

Sorry, treadmill sprints are NOT the same…  Remember, to be a complete athletic beast, you need to be MACHINE FREE!

Bottom Line – Get out and RUN!

So, I hope that you’ve gotten some good tips on how to build up your legs.  It’s really not that complex…

Do this and instead of turning into a robot that can’t move and is more susceptible to tearing a hammy, you’ll look athletic, feel good, and be STRONG!

And, if you want a FULL PROOF PLAN to help build you up some seriously STRONG, POWERFUL, and ATHLETIC legs, I would highly recommend you check out my Athletic bodybuilding course, IRON MUSCLE.

It’s on sale now but ONLY until this Friday, Dec 16th!

QUICK QUESTION – What’s your FAVORITE lower body movement?  Do you have some memorable lower body training sessions???  Please share your thoughts and comments below!