I can remember when I used to do 500 crunches after each wrestling workout.  I would stay after practice and get 500 hundred in no matter what!

I would do 100 with my feet flat on the floor, a 100 when my legs straight up, a 1oo bicycles, 100 reverse crunches, then finish with 100 butterfly crunches.

Damn I wasted a TON of time!

If I only knew what I know today, I would’ve got a bunch more out of my training time.

That”s how it goes though!   I was simply misinformed back then!

The only bonus was that I had the work ethic at least!  That adds some points!

So, let’s dive into talking about CORE TRAINING.

Everyone wants to know about it right??  I get questions ALL the time!

“What are the best exercises for abs??”

“When do I train my abs for the best results??”

So after a ton of questions came pouring in after I sent out a survey to all of my hardcore readers out there, (Thanks to those that replied!!!) it has been brought to my attention that people would like to know when to train their abs.

This is a great question and I have a fairly good answer.

I say ANY time during the workout is fine.  It all depends on what you’re trying to accomplish.

I usually prefer to do abs at the end of a training session so I can really put more focus in on hitting them hard.

The truth is that if you’re training like an athlete, like I talk about constantly, then you’ll be hitting your abs the whole workout.  Most athletes and trainees don’t even realize they are doing this…

You are forced to engage your abs, especially when using a heavier weight.

BUT, if you’re an athlete, you’ll need to throw in some extra work to get those abs strong!

There’s NO EXCUSES For a weak core!

So, here’s 5 different ways you can add in core training to your training sessions.

I love throwing ab movements in with other strength exercises.

I like to try and mix the movement up so I’m hitting a different muscle movement than the strength movement I using.

So for example, I really like using ab wheel rollouts paired up with pulling movements or squats.

You work you triceps and shoulders a ton while doing wheel rollouts so you give your legs a break while you work your abs.  Great combo.

Another is using a hanging leg raise variation with a press, deadlift, or squat.

Again, I’m giving my legs and upper body some what of a rest, but directly working the abs.

There’s a good thing about hitting your abs in the warm up.  It engages your core and preps you for the workout.

I like throwing in animal type movements such as bear crawls, crab walks, and inch worms into my warm up routine to really turn on my abs.   I also will hit some band exercises as well.

Throwing ab exercises in circuits is another great way to add them into your training session.

This works in very easily with the TRX and is great for throwing core movements into a TRX circuit.  Hitting a full body circuit on the TRX will easily hit your core big time.  An example would be doing some TRX Rows, TRX Knee Tucks, TRX Push Ups, TRX Pikes, then finishing with a TRX Plank hold.  That will CRUSH you abs!

That’s not for beginners!

4) Right After Sprints or Other Cardio Movements

The best time to hit isolated core movement such as planks and other static holds, is when your straight up out of breath.  This makes the core movement so much more effective.  You really have to work to stay tight and keep your abs engaged.

I like hitting a 40 yard sprint then immediately hitting a plank hold for 30 secs.   Or, I’ve hit battling rope intervals while super setting planks in with the battling rope.  I would do 20 secs of work on the rope and 20 secs in the plank for rest.   It’s a lot harder than doing a plank after a squat or press.

Try hitting your static holds and planks when your tired to feel the effects even more.

When I ran track in college, our track coach had a hell of a finisher core workout.   It involved medicine ball twists, planks, and different partner drills.  Since then, I’ve taken what I learned from that and have tweaked my own little finisher routines.

What I like to do for core finishers is to take a bunch of different core movemetns and put them into a whole core circuit.

I always start out with a full body weighted core move.  So things like sandbag get ups, Turkish get up, sandbag or kettlebell sit ups and I’ll hit somewhere around 8-12 reps.

After that I’ll hit a bodyweight or light resisted rotational movement.  So moves such as grappler rotations, kettlebell Russian twists, hanging windshield wipers, band rotations, or cross body knee tucks for reps around the 10-12 rep range.

Next I usually go back to a full body unweighted core movement.  So any of the weighted movements mentioned above just unweighted.  Usually its rollouts, knee tucks, v-seats, or hanging leg raises for 12-15 reps.

To end the circuit, I’ll always end with a isolated static hold either weighted or unweighted.  So all different types of plank holds with weights or bands work well here.  I even do lots of rollout holds on hanging ropes or the TRX.   I try to go for 60 secs on these.

This hits everything and will light you up big time!

Try it out for sure!

One thing to remember, especially if you’re trying to get a shredded six pack is that core movements are NOT the answer to getting a shredded stomach.

These movemetns are more for adding strength and power. 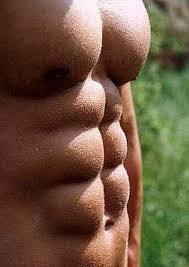 Getting your overall bodyfat % lower is the key to a shredded sixpack.  To do this, you need to hit big lifts, add muscle to your frame and EAT RIGHT.  Just remember these points if you’re after a sixpack!

I’ve mentioned a great resource I’ve found to be extremely helpful before from my boy Jason Ferruggia.  In his manual, Muscle Gaining Secrets, he has a pretty sick eating plan that I’ve taken and have adapted to my own eating habits.

I’ve taken a lot from Muscle Gaining Secrets and have molded it into what I use today.

Speaking of programs, I’m nearing the completion of my own training system that will be available to ONLY the most Hardcore, Serious People in just a few short weeks!

I’ll be back with more about that in a later post.