So the other morning, my fiancé and I decided to have ourselves a little “pose down”. Since you’re usually the leanest and meanest first thing in the AM, we took this picture right after we both woke up.

Can you guess who’s on a very STRICT bodybuilding diet and who’s NOT?

When I say strict I mean “STRICT” too…

Still thinking about who’s following what?

The ANSWER – Aundrea is on the STRICT diet…

Now, when we took this pic she was one week out from her fitness modelling show and the 8 weeks prior to that, she had been following a STRICT bodybuilding show preparation diet (obviously it’s been working!)

Now, doing a show is absolutely awesome, but at the same time, NOT many people want to follow a STRICT diet plan as my fiancé Aundrea had to follow because of a few different reasons…

C) Strict Diet’s are TIME CONSUMING and EXPENSIVE – You have to bring your meals with you everywhere you go, pre-prepare food, go buy food more often…  It sucks!

I give my girl a TON of credit and I HIGHLY RESPECT the fact that she is able to do it.  She has a different mindset when it comes to this stuff that most people do NOT have.

In order for a meal plan like her’s to work for you, you’ve got to have the mindset and drive that she has.   Training for the show is the EASY part…  EATING for the show on the other hand is the part that 9 out of 10 people can’t do.

Now, what if I told you that the eating plan I’m on is almost a complete polar opposite in everything the bodybuilding diet follows, but works just as well if not better?

I wouldn’t be lying to you because the plan that I follow, truly works.

And before I get into this any further, let me just say that when I refer to this as a “plan” I don’t mean some temporary 8-12 week “diet”.  This is a LIFESTYLE so this “plan” is something you do everyday…

Now, I’ve talked about this plan in the past.

It’s basically all about combining the strategic fasting principles laid out in The Renegade Diet and sticking to mostly a Paleo like eating style.

What’s even more great about this eating plan is that I eat basically as much as I want at night!  PLUS, every weekend I have myself an “ALL OUT” cheat meal.  Sometimes I even have two or three cheat meals…

Cheat meal or not, every night is an all out feast!

In fact, the night before I took that picture, this is what I had (it was a cheat meal)…

Taking in the fact that this was from a nice restaurant and knowing how nice restaurants prepare food, the calories for this meal alone had to of been well into the 1000’s.

Did it effect me at all?

Well, look at the picture above for your answer…  I woke up LEANER…

Guess what my sweet fiancé Aundrea ate that same night…

I felt bad for her, but at the same time I was very PROUD of her for not getting off track with her diet plan.  That takes a great deal of commitment and sacrifice!

And to even go straight into the “belly of the beast” and sit right in front of all that temptation at one of our favorite restaurants…  Even more RESPECT!

Again, 9 out of 10 people LACK this kind of focus and DISCIPLINE so there needs to be a better way to get LEAN and STAY STRONG then with following a STRICT bodybuilding type diet.

Now, with what you know thus far, which meal plan looks more appealing to YOU?

While they both will get you LEAN, only the meal plan I’m following will help you GAIN muscle and STRENGTH at the same time.

Again, this plan is the masterpiece that Jason Ferruggia has created and I’ve made it my own and now I want YOU to make it your own as well!

In a nutshell, here are the simplistics:

This plan has also gotten me a lot LEANER and STRONGER.

There’s a few modifications I had to make in order to adjust to Jason’s Plan since I typically train early in the early AM around 7:15 in which I still fast through my workout, but I make sure to take a quality BCAA before and after my sessions.

If it’s an extremely HEAVY and INTENSE workout, I’ll have myself a protein shake right after my training session as well.

That’s only when I train heavy deadlifts or squats and follow that up with a metabolic conditioning circuit of some sort.  I just want to make sure I get in enough fuel to properly help my recovery process begin.

What I do to ensure I have enough energy to get through my INTENSE AM session is to LOAD UP the night before on smart starches and protein.

This is NEW to me as I was always one to say, “NEVER eat STARCHY CARBS AT NIGHT!”.  Little did I know you can actually make this work and it works well!

I’ll have a TON of pumpkin or a sweet potato with my dinner and sometimes I’ll have quinoa every now and then.

I always add that with at least 12-16 oz. of lean protein like a Grass-Fed Steak, fish or Organic Free Range Chicken Breast.

Hmmmm!  I’m always looking forward to dinner as should you!

Overall, I just thought I would share the SUCCESS I’ve been having thus far with Jason’s Renegade Diet. 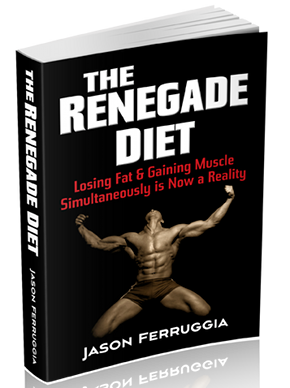 g about it!  I know not everyone is alike, but for anyone that is BUSY during the day and your main goals are to get STRONGER, BUILD MUSCLE, and get LEAN all at the same time, this is a good option.
I would definitely take a look at it if you haven’t done so yet!

Now, If you have been following the Renegade Diet, or you’ve been fasting for some time now and have seen some positive RESULTS from it, let me know in the comments below!

***ALSO – Who do think has the better abs?  Post your vote along with your thoughts below!***