Since coming back from my competition in the North Central CrossFit Regionals, I’ve been getting a ton of questions in regards to Olympic Lifting.

If you’re a serious athlete or lifter you know about the many great benefits of Olympic Lifting.

All of the different variations are extremely beneficial and effective at helping one build more explosive power, speed, and strength.

If you’re truly serious about training and know you’re sh*t, you probably how tough it is to not only learn how to properly do the many different variations of Olympic lifts, but you also probably know that teaching them can be a pain in the ass as well.

I can remember back in 7th grade when our football coaches would bring in the Senior’s to come in and help teach the Olympic Lifts.  I could not get these down save my life when I first tried and just from that, I dreaded when the seniors came in to teach the Oly lifts and wanted to quit!

It would have been nice to know that I could have done easier variations of the Olympic Lifts to start off.

Speaking of Olympic lift variations,  one the most effective ways I’ve been able to build more explosive power and strength with my athletes and myself is with NON-Barbell Olympic Lifting.

How the hell is that possible?

Well, to put it to you easily, you ditch the barbell.  Sounds kind of silly, but let me tell you this, it works and if building more power and explosive speed and strength is your goal, you’ll want to learn the variations I’m about to talk about.

So, how is Olympic lifting possible without the barbell?  Easy – use many of the other strength tools available in place of the barbell.

Think about it, you have some great options out there other then barbells such as dumbbells, kettlebells, and even sandbags that you can use to reap the same benefits.

The easiest two tools to learn the many different types of Olympic lifts with are with your DB’s and Sandbags.

Kettlebells are also a very effective and highly valuable strength tool to use for Olympic lift variations, but for the sake of this article, I’m going to stick with just the dumbbell and sandbag variations since kettlebells are a little bit more technical, take more time to learn, and they’re still a bit scarce among serious athletes and lifters.

Now, what’s cool about DB and Sandbag Olympic lifts variations is that I can take a kid off of the street that has NEVER done any sort of Olympic lifting before in his life and within just a few mins, I can get him to be doing power cleans THE RIGHT WAY by using just a sandbag.

Now before I get into the different variations of Olympic lifts with these two strength tools, lets dig into the overall reason wHY a bit more.

First off, I know it would be f*cking sick to be able to snatch over 300 lbs or jerk over 300 lbs over your head like Pyrros Dimas or the American great Kendrick Farris, but in all honesty, how many athletes are going to ever get to this level of strength, technique, and power?  Same goes for most of the seriously hardcore lifters out there as well.

And to what point would being able to do complete feats of strength and power pay off such huge dividends unless of course you were planning on possibly making a run at the Olympics or competing in a Olympic competition some day?

Most guys and gals reading this are after a few things…  Building up more strength, lean muscle, explosive power, and overall athleticism for the sake of looking and feeling good, as well as increasing overall performance (AKA – to be a total badass mo fo).

There comes a point when you need to look at the training you’re doing and ask yourself what the RISK vs. REWARD really is.

I’ve had many past teammates that were hella strong and explosive with the Olympic lifts, but when it came time to perform on the field, they sucked ass and on top of that, many of them that were throwing up impressive numbers (350+ power clean, 300+ jerk, 225+ snatch) dealt with their fair share of injuries all coming from the weight room that they could have easily of avoided if they didn’t try to go so heavy with their Olympic lifts.

If you know anything and are somewhat smart (you’re reading this article right now so I know you’re NOT dumb), you would know that the main goal of training before anything else is to PREVENT injury, not cause it.  When ever you go into a training program, you need to make sure and evaluate the overall RISK vs. REWARD factor when it comes down to what you’re doing in your programs.

Olympic lifting is one of those major areas you need to look at when assessing RISK vs. REWARD..

So, let’s talk about how you can keep the many great benefits and adaptations you receive from Olympic lifting, but at the same time avoid the possible ricks of injury as well as the HUGE learning curve that’s involved. 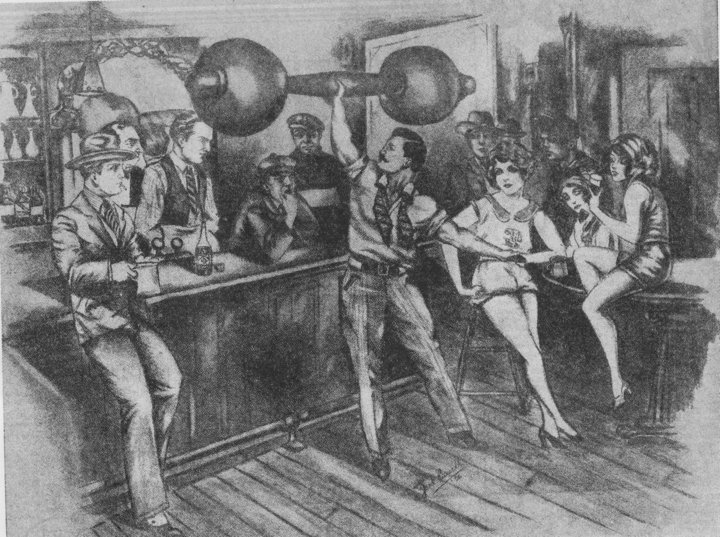 Let’s first start with one of the most common strength tools serious lifters have available to them which is the dumbbell.

You can perform pretty much ALL of the Olympic lift variations there are with a single dumbbell.  You can obviously do the same movements with two dumbbells as well.

You have your 1 arm snatch, 1 arm clean, squat clean, power clean, clean and jerk, clean and press…   Their all there and what’s awesome about these variations is that you can get the very same benefits you get from Olympic lifting as you would get with a barbell.

Think about it, you’re still working triple extension with the hips just as you would with a barbell but now, you don’t need to put such great amounts of focus into your technique.

When you have a barbell in hands, there’s a lot more focus in on your technique and the time it takes to learn the movement is a lot longer.

As you can see, you get the same explosive hip action as you would with a barbell, but without it.

The bonus is there’s not as much technique needed and as I’ve stated before, you get the results you want without the stress of too much technique and cost of time.

Now, dumbbells are great as most people have access to them, but another great strength tool that can be used for Olympic lifts that I mentioned earlier that will get you the same benefits as regular barbell Olympic lifts will give you are with sandbags

One of my favorite movements to train athletes with in order to build up an explosive set of hips is the sandbag power clean.

It’s easy to teach and young, inexperienced athletes pick this movement up quick.  It’s also got the many benefits odd object training produces as well (which is a completely separate article in itself).

Another favorite that still works hip triple extension is with SB Shouldering.

These build up some serious strength and power.  Check out this old Thursday Throwdown I did a while back that involves some Sandbag Shouldering…

So now that you know there are ways to get around the barbell Olympic lifts and still reap the many benefits, let’s look at what a typical program may look like.

Here’s a 3-day template one may use

I would repeat this 3 day program for 3 weeks progressing each week as prescribed.

Take a deload the 4th week then repeat the process switching up the variations you use with the Olympic lifts above.

Bottom line, you can use sandbags to get the same benefits you get with barbell Olympic lifting, but with huge cuts in time and technique!

Grab a dumbbell or a sandbag and get f*cking explosive!

I would like to know what your favorite Olympic lift variation is.  ALSO, post up any question you may have in regards to Olympic Lifting.